Prior to ISO 9001:2015, the standard focused on identifying and meeting the requirements of customers but in the 2015 version, organizations are now required to determine the interested parties, their potential effects and their requirements that are relevant to the QMS.

According to ISO 9000:2015, an interested party is a “person or organization that can affect, be affected by, or perceive itself to be affected by a decision or activity. Examples include customers, owners, people in an organization, providers, bankers, regulators, unions, partners or society that can include competitors or opposing pressure groups”.

How does this affect our QMS?

However, the problem with this definition and the explanatory notes is that interested parties can include both benevolent and malevolent parties e.g. in the pharmaceutical industry some Animal Rights Campaigners maybe intent on closing down a research unit and use malevolent practices. It has become customary to refer to the benevolent parties as stakeholders because they put something into the organization in return for some benefit they gain from the relatinship, whereas malevolent parties put nothing into the organization and are intent of taking out as much as they can get away with and so we can refer to these parties as risks. ISO doesn’t make this distinction which means they are either ignoring malevolent parties or are assuming they are treated as risks.

Having identified the parties on which the organization depend for its success or which threaten its success you need to determine: 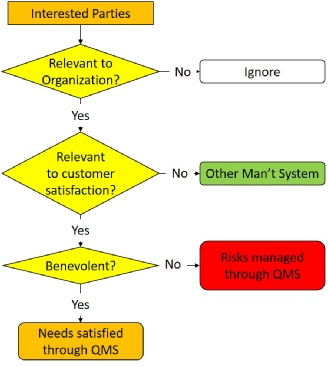