Systems of documentation to documented systems

The system of documents

The interpretation that dominated the early versions of ISO 9000 (1987-1999) was that a quality system was a system of documentation, hence the graphic above showing a shelf of books. The diagram to the right taken from ISO 10013:1995 appears to vindicate this interpretation until you notice that it is referring to a description of the quality system. 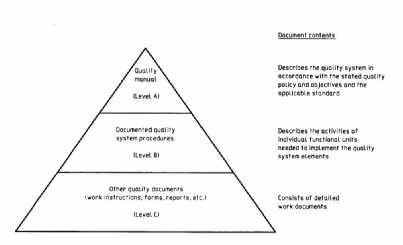 This perception of a quality system dates back to the 1960s when Armand Feigenbaum described it as  “the network of administrative and technical procedures required to produce and deliver a product of specified quality standards”. When the word system is used in this sense it is as a system of concepts (see also Quality Management Systems). Even if we use the term system in the sense of a system of objects, the way in which requirements are expressed in ISO 9001 can lead us to believe it is still referring to a set of documents e.g. where it requires a system to be established, implemented and maintained, implying that by documenting the system it becomes established following which it is implemented, implying that it’s a tool that people use. A more plausible explanation is that its not the system that is implemented (i.e. put into effect) but the policies, procedures and other instruments.

It is noteworthy that a version of the above diagram also appeared in ISO 10013:2001 after the definition of the term system was published in ISO 9000:2000 but in a supporting ISO document is the following statement “It is stressed that ISO 9001 requires (and always has required) a “Documented quality management system”, and not a “system of documents”.

One of the problems with previous versions of ISO 9001 has been the considerable emphasis on documentation. Having been required to produce documented procedures, users did so in their millions, often without thinking of the message they were conveying and why that message needed to be conveyed in the first place.

The 2015 version is very much different as no specific documented procedures are required. The documentation to be produced is that which the organization deems necessary for the effectiveness of its quality management system. This gives organizations the flexibility to decide the documentation they need and no longer produce documentation only because it was a requirement of the standard.

When we examine ISO 9000 and ISO 9001 we left in doubt as to what a QMS is (see Quality Management Systems) and it maybe that three different types of system are being referred to.

The relationship between these three types of system is shown  below.

If we view the organization as if it were a system, we might find all three systems, the first containing people who produce the documents; the second being a system of documents and the third containing people who implement the system of documents. But which of these is the QMS that is referred to in ISO 9001? Only TC 176 can answer this question but it depends which approach to systems they take

Making the transition to a documented system

There is no series of actions one can take to make this transition because it’s more to do with the way one thinks and therefore its a change in paradigm that is needed. Some things you my need to do are:

?To use various ways of capturing what you see or imagine what you see. Flow charts may capture how work flows through the organization and at the same time capture artefacts used at each stage but they won’t capture all the interactions. They probably won’t capture the changes in behaviour that arise between people when they are engaged in the work they are doing and when there are conflicts, bottlenecks, work overload. This needs a different type of approach see system dynamics.